Do dogs really see in just black and white?

Curious Kids is a series for children of all ages. If you have a question you’d like an expert to answer, send it to curiouskidsus@theconversation.com.

Dogs definitely see the world differently than people do, but it’s a myth that their view is just black, white and grim shades of gray.

While most people see a full spectrum of colors from red to violet, dogs lack some of the light receptors in their eyes that allow human beings to see certain colors, particularly in the red and green range. But canines can still see yellow and blue. 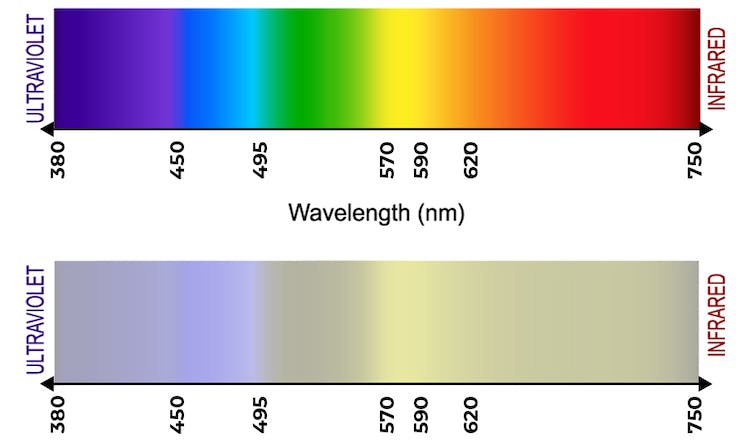 What you see as red or orange, to a dog may just be another shade of tan. To my dog, Sparky, a bright orange ball lying in the green grass may look like a tan ball in another shade of tan grass. But his bright blue ball will look similar to both of us. An online image processing tool lets you see for yourself what a particular picture looks like to your pet.

Animals can’t use spoken language to describe what they see, but researchers easily trained dogs to touch a lit-up color disc with their nose to get a treat. Then they trained the dogs to touch a disc that was a different color than some others. When the well-trained dogs couldn’t figure out which disc to press, the scientists knew that they couldn’t see the differences in color. These experiments showed that dogs could see only yellow and blue.

In the back of our eyeballs, human beings’ retinas contain three types of special cone-shaped cells that are responsible for all the colors we can see. When scientists used a technique called electroretinography to measure the way dogs’ eyes react to light, they found that canines have fewer kinds of these cone cells. Compared to people’s three kinds, dogs only have two types of cone receptors. 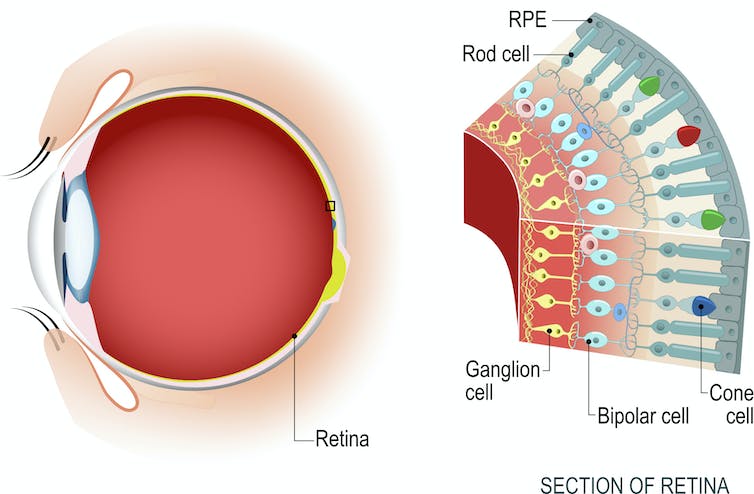 Light travels to the back of the eyeball, where it registers with rod and cone cells that send visual signals on to the brain. iStock/Getty Images Plus via Getty Images

Not only can dogs see fewer colors than we do, they probably don’t see as clearly as we do either. Tests show that both the structure and function of the dog eye leads them to see things at a distance as more blurry. While we think of perfect vision in humans as being 20/20, typical vision in dogs is probably closer to 20/75. This means that what a person with normal vision could see from 75 feet away, a dog would need to be just 20 feet away to see as clearly. Since dogs don’t read the newspaper, their visual acuity probably doesn’t interfere with their way of life.

There’s likely a lot of difference in visual ability between breeds. Over the years, breeders have selected sight-hunting dogs like greyhounds to have better vision than dogs like bulldogs.

But that’s not the end of the story. While people have a tough time seeing clearly in dim light, scientists believe dogs can probably see as well at dusk or dawn as they can in the bright middle of the day. This is because compared to humans’, dog retinas have a higher percentage and type of another kind of visual receptor. Called rod cells because of their shape, they function better in low light than cone cells do.

Dogs also have a reflective tissue layer at the back of their eyes that helps them see in less light. This mirror-like tapetum lucidum collects and concentrates the available light to help them see when it’s dark. The tapetum lucidum is what gives dogs and other mammals that glowing eye reflection when caught in your headlights at night or when you try to take a flash photo.

Dogs share their type of vision with many other animals, including cats and foxes. Scientists think it’s important for these hunters to be able to detect the motion of their nocturnal prey, and that’s why their vision evolved in this way. As many mammals developed the ability to forage and hunt in twilight or dark conditions, they gave up the ability to see the variety of colors that most birds, reptiles and primates have. People didn’t evolve to be active all night, so we kept the color vision and better visual acuity.

Before you feel sorry that dogs aren’t able to see all the colors of the rainbow, keep in mind that some of their other senses are much more developed than yours. They can hear higher-pitched sounds from farther away, and their noses are much more powerful.

Even though Sparky might not be able to easily see that orange toy in the grass, he can certainly smell it and find it easily when he wants to.

Hello, curious kids! Do you have a question you’d like an expert to answer? Ask an adult to send your question to CuriousKidsUS@theconversation.com. Please tell us your name, age and the city where you live.

And since curiosity has no age limit – adults, let us know what you’re wondering, too. We won’t be able to answer every question, but we will do our best.

Nancy Dreschel does not work for, consult, own shares in or receive funding from any company or organization that would benefit from this article, and has disclosed no relevant affiliations beyond their academic appointment.

This article is republished from The Conversation under a Creative Commons license.

Nearly 1,000 pick up bottled water donations at distribution in town of Campbell