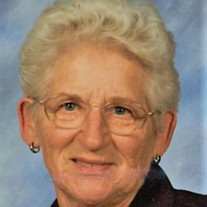 Bev was born in Neillsville, WI on January 27, 1932, to Arthur and Gretchen (Kurth) Ampe. She graduated from Greenwood High School with the Class of 1949. After graduation, Bev was united in marriage to William Stabnow. Although the couple later divorced, the couple was blessed with two children: Randy and Deborah.

Bev then married Norman Thorson, and the pair worked side by side as loggers until Norman’s death in 1984. To this union, Bev and Norman welcomed three children: Galen, Valerie and Mark. Bev was employed with Nelson Muffler in Neillsville for many years until her retirement.

After meeting Wilfred “Willy” Wehrman, Bev volunteered and bartended at the American Legion Post #175 in Loyal. The couple were married in April of 1994 and enjoyed 12 years of marriage until his passing in 2006.

She was preceded in death by her parents; husbands: Norman and Willy; daughter: Deborah Gungor; brothers: Gary, David and Donald Ampe; and a brother-in-law: Howard Hasz.

A Celebration of Life for Bev will be at 2 p.m. on Saturday, November 7, 2020, at the Arcadia Country Club in Arcadia.